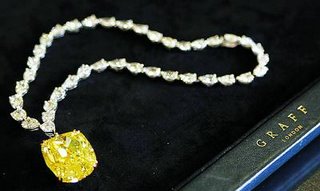 A stunning bright yellow 100-carat diamond was unveiled in London for the first time in the world. This gem is so rare that experts estimate that it could fetch a hefty price tag of US$20.96 million. Named as the 'Dream Diamond', it is being sold by the Graff diamond company, which says it is likely to be bought by a gem collector, investor, or a celebrity.

Although most diamonds are clear, occasionally the combination of heat and pressure that forms the stone along with certain minerals in the rocks can produce colored versions. Purple, blue, pink, yellow, green and red diamonds all exist, although they are extremely rare.

Because this South African glittering gem is of a particularly vivid color with an enormous size, hence it makes even rarer than other rare 'canary yellow' diamonds. Currently, the most famous and valuable yellow diamond is the Tiffany Diamond, which is still on show in the Fifth Avenue flagship store in New York. This 287.42 carat stone was acquired by Charles Tiffany from the Kimberley Mines in 1878.

Anonymous said…
The Tiffany Yellow weighed 287 carats as a rough crystal. It was cut into a 128.54-carat cushion. Its not the most valuable yellow diamond, but its certainly the most famous. It was appraised for about $12 million in 1983. The Dream Diamond has been graded as Fancy Vivid Yellow (and Internally Flawless), which is the best hue saturation grade you can get. I've never heard the Tiffany Yellow's color grade but the several people I've met who've been able to handle it in person tell me its probably Fancy Yellow rather than a more saturated Fancy Intense or Fancy Vivid. Its not a flawless stone, either, but then most diamonds aren't.
26 June, 2007 23:00