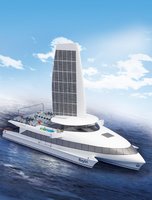 A company called Hornblower Yachts has plans to construct the world’s first sun and wind-powered ferry. Each of the two ferries will cost between US $6 million and $8 million. 50% of the ship’s power will come from the sun and wind while the other 50% will come from diesel fuel — and will emit half the pollutants of a similar sized conventional ferry.

The slickest feature? The triple-hulled vessel will have a 45-foot high retractable wing covered in solar panels that can generate 20 kilowatts of electricity to help take the load off the two diesel engines. The wing also generates some 170 hp on its own as a sail. When conditions get hairy and the wind hits 30+ knots (that's when many sailboats start to de-mast), the wings fold up, all beetle-like, and the ferry operates like one of its older counterparts. All this is based on a similar ferry that's already been in operation in Sydney for a couple years.