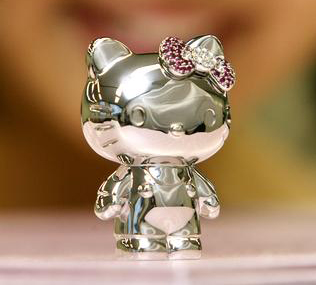 Hello Kitty, an anthropomorphized white cat, is characterized by a distinctive bow or some other decoration on her left ear, and the absence of a mouth. Widely adopted as a fashion statement, products featuring the character can be found in virtually any American department store and it has emerged into a global phenomenon with more than 50,000 different products on sale, along with an upcoming feature film and animated television series.

In Tokyo, the mouthless cat and global icon of cuteness, has gone platinum with a gem-studded miniature priced at $163,000.

The 590g miniature of the feminine feline is made of platinum and comes with seven hair ribbons made of gems including diamond, ruby, pink sapphire, amethyst and blue topaz, Hello Kitty's maker Sanrio said Friday.

The figurine comes with a price tag of ¥18,9-million -- a record high in Hello Kitty's extensive line-up.

Only one set is available, which will go on sale Tuesday for the holiday shopping season at the Mitsukoshi department store in Tokyo.