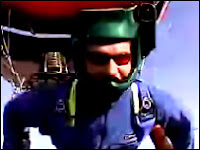 Michael Holmes, a skydiving instructor, managed to survive a 12,000ft drop in New Zealand after his parachute failed. He fell into a blackberry bush at around 160 km/h (100 mph) and suffered a punctured lung and broken ankle.

Michael's father told us that the main parachute became tangled, which then caused problems for the reserve parachute. He explained what happened:

"Half of the parachute collapsed. The parachute is attached to a container on the skydivers back with a load of lines and they became tangled. "The tangle went right back down to the container with the result that he couldn't release the pain chute, what they call, cut away the main chute."Nor could he deploy the reserve and the reserve couldn't deploy itself either because of the tangle."

Michael Holmes snr told us "It's a one in a million chance it could happen and he was very fortunate he survived."