Girl on basketball get new limbs 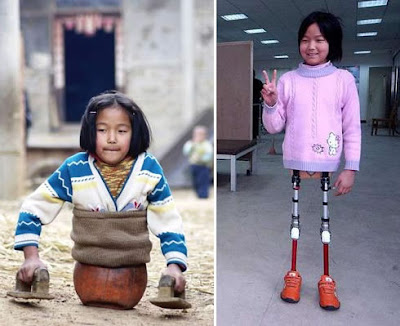 Qian Hongyan, a girl in China, also known as the basketball girl, lost both her legs in 2000 and has been getting around with the help of a basketball (left image) until 2005 when doctors fitted her with a pair of artificial limbs. She has recently acquired her second pair of artificial limbs (right image) at the Beijing Rehabilitation Center in Beijing to fit her growing body on March 16, 2007. A snippet from The Scotsman:

The Chinese youngster’s family was too poor to afford the sophisticated medical assistance that could have helped her to walk again when she lost her legs in a horrific accident in 2000 when she was just three years old.

But in an inspired move Qian’s parents came up with the idea of sitting her on a basketball, which, with the aid of a couple of brushes that double as low-level crutches, enabled her to move herself by bouncing around.

She became highly mobile on her unconventional transporter and was able to travel independently between her home and the local school.

After years propelling herself along the ground, the youngster has been given the chance to walk again after she was taken under the wing of doctors who have fitted her with prosthetic legs in 2005.

Here's a slideshow of her life after the tragic incident.


She seems happy! I hope she lives a good life.