Autistic boy is a human iPod 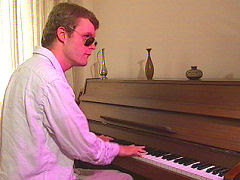 An autistic boy who is blind and can barely speak has earned the nickname the 'human iPod' because of his piano playing abilities.

Derek Paravichini began playing the piano when he was two and started performing at the age of four, demonstrating his extraordinary ability to hear, remember and play all the music he encounters.

With no visual models to guide him, his technique was chaotic, and even his elbows would frequently be pressed into service, as he strove to reach intervals beyond the span of his tiny hands!

Born three months premature and weighing just one and a half pounds. Derek grew up blind and severely autistic, but these disabilities have probably led to his musical gift.

"We think that because he can't see and doesn't understand a lot of what is going on, other parts of his brain have got used for making music - so he's got a sort of musical factory up there," Mr Ockleford said.

He continued: "For Derek music isn't just a hobby, it's a lifeline - it's his way of communicating with the world, of interrelating with other people and above all of making them happy. He likes to make people happy and he knows he can do that through his music."


The complete documentary about him can be found after the jump.