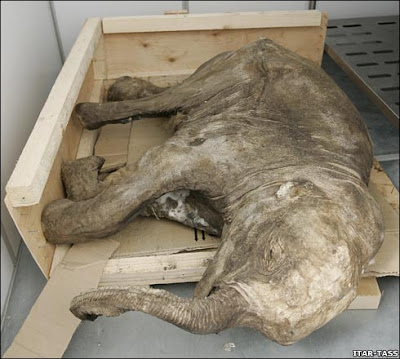 A baby mammoth unearthed in the permafrost of north-west Siberia could be the best preserved specimen of its type, scientists have said.

The frozen carcass is to be sent to Japan for detailed study.

The six-month-old female calf was discovered on the Yamal peninsula of Russia and is thought to have died 10,000 years ago.

The animal's trunk and eyes are still intact and some of its fur remains on the body.
The 130cm (4ft 3ins) tall, 50kg Siberian specimen dates to the end of the last Ice Age, when the great beasts were vanishing from the planet.

It was discovered by a reindeer herder in May this year. Yuri Khudi stumbled across the carcass near the Yuribei River, in Russia's Yamal-Nenets autonomous district.

Video after the jump.