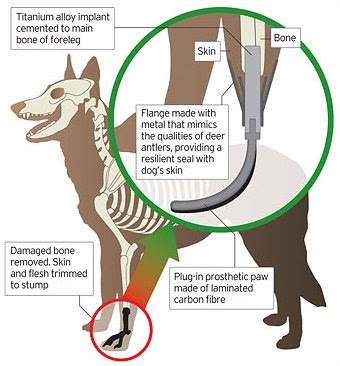 It is believed to be the first time that such an operation has been carried out and could provide hope for many humans.

What makes the false limb special is that the dog's skin can grow into the metal.

Storm, who lives in Oxshott, Surrey, had a leg removed when it became infected with an aggressive tumour earlier this year.

The operation was carried out by Noel Fitzpatrick, a veterinary surgeon based in Farnham, Surrey, who specialises in repairing the damaged limbs of pets.

"The technology is not just the first time that the implant type has been used outside the human finger," Mr Fitzpatrick said.

"Because it has been implanted into the radius of the forearm of the dog, it will act as a model for human amputees in the future and provides hope for people without feet or hands."