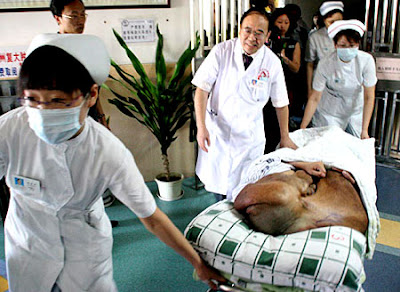 Chinese surgeons have successfully operated on a man with a massive 33-pound tumor that hung down from his face, completely obscuring his features and warping his backbone. More than 10 doctors and nurses took part in the hour-long surgery that removed the tumour.

The patient, Huang Chuncai, 31, from southern Hunan province, suffered from a facial tumor that had a perimeter of 97 centimeters (38.2 inches), and measured 57 centimeters (22.4 inches) in length, according officials at Fuda Cancer Hospital in the southern Chinese city of Guangzhou.

Huang's facial tumour became noticeable when he was 4 years old, the hospital said. It grew bigger ever more rapidly as he grew older, blocking his left eye, pushing his left ear to shoulder level, knocking out his teeth and deforming his backbone.

Video after the jump.

kelly said…
what happened after first operation? did he get rest of tumours removed and is he still alive?
09 April, 2008 16:37