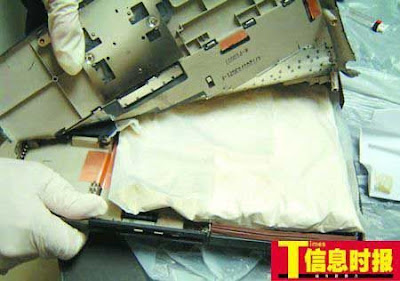 On Aug 30, 2007, flight SQ814 departed for Guangzhou, China from Singapore. The plane landed at the Baiyun International Airport and a leisurely dressed Malaysian “businessman” holding a luggage tried to clear the customs when the custom official noticed that he had a suspicious look. As a result, his luggage was opened and checked by the officials. Found in the luggage were two very old notebooks. The weight of each notebook appears to be heavier than normal. When these notebooks were scanned by X-ray machines, it was found that the interior of each was hollow. Following up with the find, the officials opened up the notebook and found 5 plastic packets which contained white powder. Further testing in the laboratory confirmed it to be heroin with the combine weight of 2 kg. This is the first time drugs were seized at the Baiyun Airport Customs. This is an unusual case as given the tight security in Singapore, such a large shipment of drugs should not have been missed.