The Frontline Soldiers Who Will Run on Solar Power 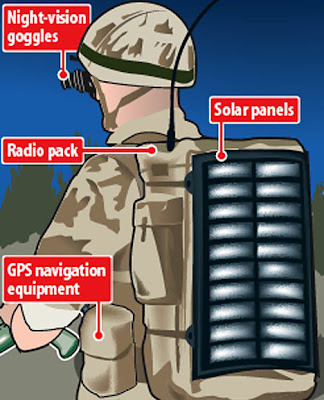 Front-line troops could soon be carrying a new piece of hi-tech gear into battle - solar panels.

Soldiers will have them moulded on to their backpacks to help power the array of electronic equipment now used in combat.

It could also help save troops' lives by eliminating the danger of equipment failing because of lack of power. And it could save them from the risk of injury posed by traditional batteries, which can explode if exposed to fire or extreme desert temperatures.

Weighing just 14oz, the panels have been developed for the Australian army.

The panels are made from a secret compound and can produce hours of low-level energy to power radios, night-vision goggles, communications equipment and sensors to detect enemy positions. They even work in cloudy conditions because they harness solar radiation rather than direct sunlight.