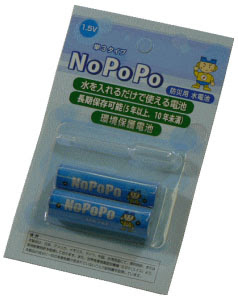 A manufacturer in Japan has developed a battery that should be slightly easier to recharge, thanks to its ability to run off a variety of liquids, including water and urine.

Dubbed NoPoPo, the battery has been developed by the Japanese company Aqua Power System and comes in standard AA and AAA formats.

The AA and AAA batteries can be recharged with a variety of liquids, inserted into the chamber via a pipette and the basic principle is that a mixture of magnesium and carbon reacts when mixed with a liquid to produce, in the case of the AA battery, up to 500 milliamp-hours (mAh) of life. This puts them on a par with existing zinc-carbon AA batteries; however, existing alkaline batteries have a longer life of between 1700 and 3000 mAh.

Unfortunately, the NoPoPo batteries can only be found in Japan at the moment.