Boy Wonder Who Can Speak 11 Languages 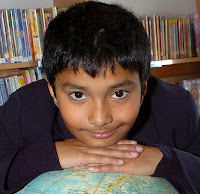 He speaks French with flair, rattles off German with ease and can hold a lengthy conversation in Swahili. His Spanish is impressive as is his Italian and he has more than a grasp of Mandarin... but at the age of ten he's too young to even leave the country on his own. Arpan Sharma has astounded his teachers by learning to speak an incredible 10 languages on top of English.

The primary school pupil has taught himself five of them by using interactive, multimedia CD-ROMs and has been fluent in another since he was practically able to talk.

Aside from his mother tongue, Arpan speaks Hindi, after learning it from his parents, and has learnt French, Spanish, German and Italian in school. In addition he also speaks Thai, Swahili, Polish, Chinese Mandarin and is currently studying the difficult Lugandan language of Uganda.

The youngster, a member of the National Children's Orchestra, uses his keen ear for music to listen to the correct pronunciation of words.

His dream is to become a top surgeon able to travel around the world to different hospitals speaking in their native tongue.