Man Builds His Own Flight Simulator in His Bedroom 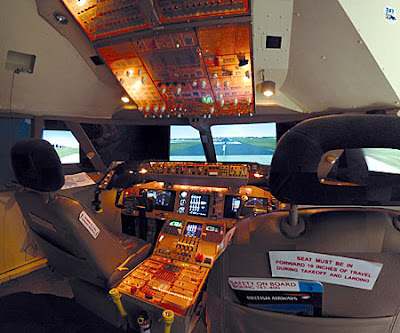 Plane fanatic John Davis lives the dream in his spare bedroom – where he has built a jumbo jet cockpit so that he can “fly” around the world.

Divorced John, 47, can listen to the rumble of the mighty engines as he thunders down the runway, and his eyes flick across nine monitors and 90 switches as the “aircraft” climbs into the skies.

Sitting in his leather flight chair – an old car seat – he lifts the undercarriage, switches to automatic pilot and settles back to enjoy the ride. He can even make announcements to his imaginary passengers.

John, who holds a pilot’s licence to fly gliders, has now quit his job as a graphic designer to run a flight simulation business from his two-bedroomed terraced house in Tile Hill, Coventry.

He said: “I have always wanted to be a pilot but I was never any good at maths – so this is the next best thing.