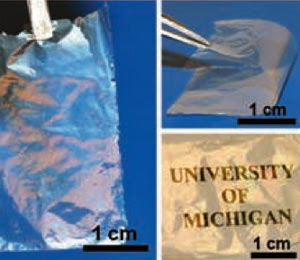 A new transparent, composite plastic as strong as steel and as thin as a sheet of paper has been developed by materials scientists.

The plastic could be used one day to produce lighter, stronger armour for soldiers or police and their vehicles. It also has potential to reduce the energy required to separate gasses in chemical factories and improve microtechnology such as microchips or biomedical sensors.

The material, which is described today in the U.S. journal Science is already being developed for practical applications and could become commercialised within a year or two, said lead author Nicholas Kotov.

"We're still at the exploratory stage but the machine is now being built in our lab to build piece as big as one meter by one meter," he added.

Made out of clay and a non-toxic glue similar to that used in school classrooms, the material is cheap, biodegradable and requires very little energy to produce, said Kotov, "It's as green as you can imagine."