Stuntman Jumps from 12,500 Feet without Wearing a Parachute 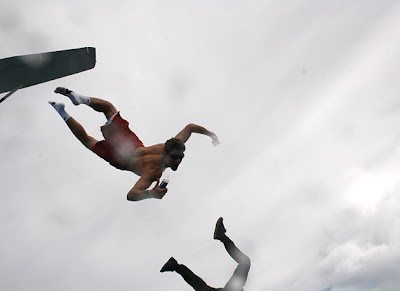 Travis Pastrana lives his life on the edge. Recently, he jumped over it.

On Wednesday, September 26, Pastrana hopped a flight from his home in Davidsonville, MD, to Arecibo, Puerto Rico, to perform a stunt he's been dreaming up for more than a year. The next morning, four members of his group skydived from a single-engine Cessna from 12,500 feet. Pastrana performed his jump wearing only sunglasses, socks and surf trunks while holding a can of Red Bull.

He was not wearing a parachute.

The jump was the latest in a string of stunts the motocross legend is filming for his next video Thrillbillies. While it may not be the most dangerous stunt Pastrana has performed, it is his most shocking. In his past stunts, Pastrana has taken his life into his own hands. This time, he placed it in the hands of three men he'd known for less than a week.

More pictures after the jump.