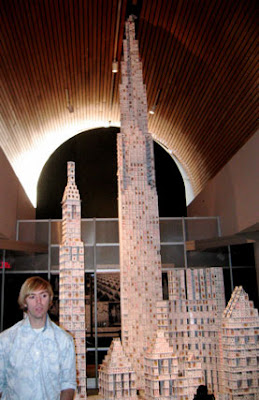 Bryan Berg, the Guinness World Record-honored "Cardstacker," took about a month to build a record-setting skyscraper that stands 25 feet 9 7/16 inches tall. That tops the previous world record of 25 feet 3 inches, held also by Berg. The Iowa native, who lives in Santa Fe, New Mexico, has been breaking world records for 15 years. Watch the tower being knocked down by Berg after the jump.