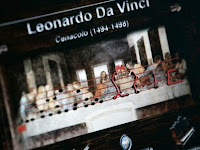 It's a new Da Vinci code, but this time it could be for real.

An Italian musician and computer technician claims to have uncovered musical notes encoded in Leonardo Da Vinci's "Last Supper," raising the possibility that the Renaissance genius might have left behind a somber composition to accompany the scene depicted in the 15th-century wall painting.

Pala first saw that by drawing the five lines of a musical staff across the painting, the loaves of bread on the table as well as the hands of Jesus and the Apostles could each represent a musical note.

This fit the relation in Christian symbolism between the bread, representing the body of Christ, and the hands, which are used to bless the food, he said. But the notes made no sense musically until Pala realized that the score had to be read from right to left, following Leonardo's particular writing style.

In his book — "La Musica Celata" ("The Hidden Music") — Pala also describes how he found what he says are other clues in the painting that reveal the slow rhythm of the composition and the duration of each note.