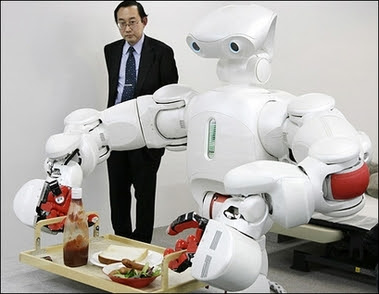 Japanese researchers on Tuesday unveiled a new humanoid robot designed to lend a hand with housework.

The 147-centimetre (four-foot-10) robot, pure white save for blue eyes and red arm joints, put its skills on display by helping an elderly person get out of bed and preparing breakfast.

While communicating with the person, the 111-kilogramme (244-pound) robot picked up tomato sauce from the refrigerator with four fingers and carried it with a piece of bread on a plate to the dining table. 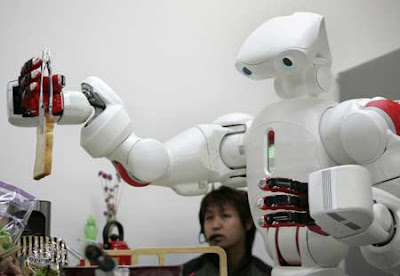 With sensors and flexible joints, the robot is able to absorb potential shocks in case it bumps into users.

The robot was developed by Tokyo's elite Waseda University and named Twendy-One, an acronym derived from Waseda Engineering Designed Symbiont.

The professor said his team aims to sell the robot in 2015.

Update: Watch the robot in action after the jump!