Twin Girl with Eight Limbs to Have Surgery 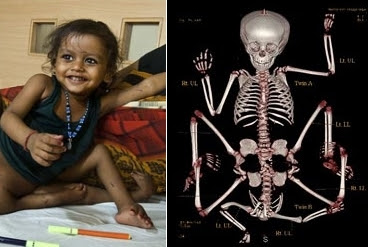 An Indian girl born with four arms and four legs is to undergo a 40-hour operation tomorrow as doctors try to give her a chance at a normal life.

Lakshmi Tatma is a two-year-old girl named after the Hindu goddess of wealth who has four arms. She was believed to have been "sent from God" when she was born to a poor rural family in the Indian state of Bihar.

It will require the latest techniques in medical science to separate Lakshmi from her "parasitical", headless, undeveloped "twin", which is joined to her body at the pelvis.

Without the operation at the Narayana Health City, on the outskirts of Bangalore, Lakshmi's parents were told their daughter was unlikely to survive beyond early adolescence.