Woman Died In 1951 but Her Cells Lived On 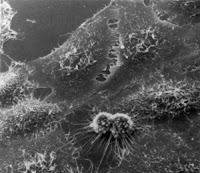 When human body cells are removed and put into a cell culture, they weaken and die quickly, usually within about 50 divisions. Without the rest of the support structure—a heart, blood circulating, a digestive system and so-on—body cells can't survive.

There is, however, one human being who is biologically immortal on a technicality, and her name is Henrietta Lacks. In 1951 she was diagnosed with cervical cancer.

George Gey, the head of tissue culture research at Hopkins who received a sample from the tumor, discovered that the cells from Henrietta's tumor would not only survive and multiply outside of her body, but they didn't age either. These cells were basically immortal.

And they're still alive, even though Henrietta herself died of the cancer on October 4th, 1951. Now, HeLa cells are about as common in biological research as the lab rat and the petri dish, and are still being grown in an unbroken lineage from the cells originally harvested from Mrs. Lacks in 1951.

In 1991 the scientific community decided it was a new species and named it Helacyton gartleri.