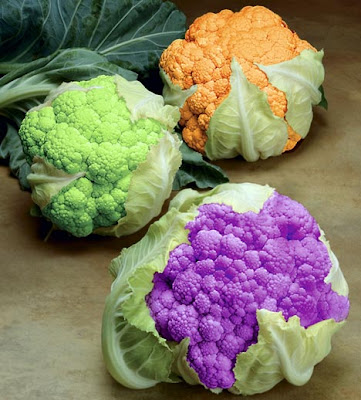 Scientists have developed amazing variants of vegetable where the traditional white florets have been changed to a garish orange, purple and green.

The "rainbow cauliflowers" are said to taste the same as the normal varieties, but add a splash of colour to the dinner table.

Some scientists have even claimed that they are healthier for you.

Andrew Coker, a spokesman for the plant company Syngenta - which is developing the plants in Europe - stressed that the colourful cauliflowers were not the result of genetic engineering, but came after decades of traditional selective breeding.

They retain their colour even after cooking. "The pictures may look garish, but they are really are this colourful," said Mr Coker.