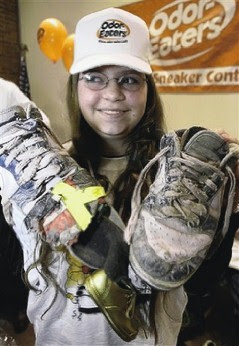 Here's one reason why you shouldn't throw away your badly worn out shoe. Join a contest with it.

Thirteen-year-old Katharine Tuck's sneakers are equal opportunity offenders. They smell as bad as they look. Now, the Utah seventh grader is $2,500 richer because of it: On Tuesday, she out-ranked six other children to win the 32nd annual National Odor-Eaters Rotten Sneaker Contest, stinking up the joint with a pair of well-worn 1 1/2-year-old Nikes so noxious they had the judges wincing.

"I'm so proud of the little stinker," said her mother, Paula Tuck. Ah, the foul smell of success.

The contest, which was founded in 1975 as a sporting good store promotion and is now sponsored by the manufacturer of anti-foot odor products, pits children from around the nation who have won state-level competitions for the generally cruddy condition of their footwear.

Anonymous said…
She could use this Japanese invention I saw called Shoe Pure 100. Works on the principle of absorbing sweat from the shoes and it looks pretty handy. But if she had done that she wouldn't have won the $2,500!
http://japansugoi.com/wordpress/japanese-method-to-make-smelly-shoes-smell-brand-new
18 November, 2007 07:52