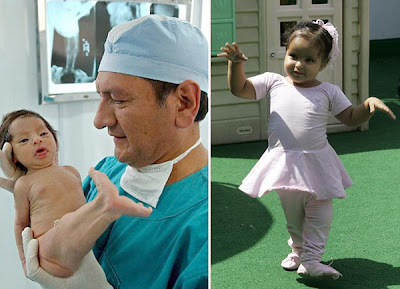 Milagros Cerron, whose first name means "miracles" in Spanish, was born with a rare congenital defect known as sirenomelia, or "mermaid syndrome," which left her legs connected from her heels to her groin (left image).

In June 2005 doctors successfully performed risky surgery to separate her legs to above her knees. A second operation to separate the remaining four inches of fused tissue just below the groin took place on September 7, 2006.

Dr. Luis Rubio, head of the medical team that separated Milagros' legs said doctors have successfully reconstructed the child's hips, knees and ankles and that she is "doing well physically."

Milagros, who turns 3 next week, now takes ballet classes and runs around the playground with her classmates (right image).

She will need another operation in about two years to reconstruct and repair her urinary and sexual organs.