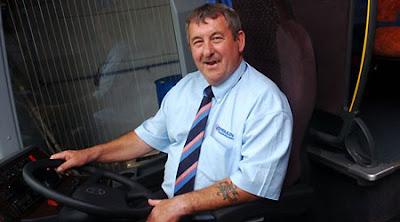 Glyn Bowden, a 55-year-old British coach driver got so fed up with German tourists bagging every sunbed that he set fire to their towels.

He was coach driver for a party of 55 British holidaymakers at Viana Marina, near San Remo, on the Italian Riviera.

The first time the group from South Wales complained to him about the German sunbed baggers, he said "Leave it to me" and dumped all of the towels at the end of the pool.

Mr Bowden said: "The following morning the Germans put them down even earlier so I did the same - with them shaking their fists at me from their windows.

"The next morning about 20 towels were there again so I collected them up, put them on a pile on the beach - and lit them.

"All the British tourists were cheering. But just a few minutes afterwards three police officers turned up and arrested me.

"They were going to charge me with criminal damage but the hotel - which owned the towels -intervened on my behalf."

Mr Bowden, from Tonyrefail, near Rhondda, added: "The Germans thought they owned the private beach but I wanted to make sure my tourists got a crack of the whip."