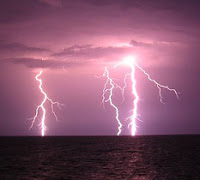 A Dade landscaper died after being struck by an unusual type of lightning that's stronger, hotter, lasts longer and strikes from clear skies.

David Canales, 41, of West Miami-Dade, was on the job at a Pinecrest home when the bolt hit. It first seared a tree, then traveled and struck Canales, standing nearby.

Experts said Canales was killed by a weather phenomenon fittingly called a "bolt from the blue" or "dry lightning" because it falls from clear, blue skies.

Dan Dixon, a meteorologist with the National Weather Service in Miami, said that when Canales was hit, a typical afternoon storm was forming but nowhere near the area.

Weather data showed that lightning activity picked up north of Pinecrest shortly before 1 p.m., as a storm gathered momentum and swept through Coral Gables and then downtown.

Most lightning bolts carry a negative charge, but "bolts from the blue" have a positive charge, carry as much as 10 times the current, are hotter and last longer.

Dixon said protecting yourself from such unexpected lightning is difficult.