The Netherlands wants to redraw the map of Europe - literally.

Dubai built Palm Island. Now the world leaders in land reclamation are considering an island in the shape of a tulip to fight overcrowding and shield the coastline from the rising sea.

The Dutch Parliament has asked a commission on coastal development to look into the idea of building islands in the North Sea that could be used for housing, farming or a nature reserve, while at the same time helping to protect the coast.

A government body set up to promote innovation has drawn up proposals for an island about 50 kilometers, or 31 miles, long, sparking fierce debate.

Supporters of the scheme say it will give Dutch companies a chance to showcase water management skills that are increasingly in demand due to global warming, but critics say the plan will be prohibitively expensive and harm delicate ecosystems. 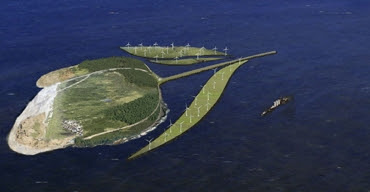