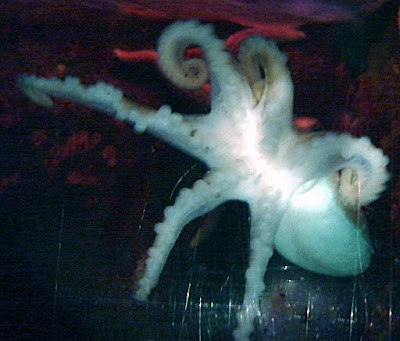 It would of course be technically nonsensical to describe this creature as a "six-legged octopus".

"Octopus" meaning "eight-legged", it would be similar to talking about a "three-wheeled bicycle".

What this picture depicts, therefore, is a hexapus. Henry the Hexapus - as he has been christened by his keepers - is a resident of Blackpool Sea Life Centre in the north-west of England.

His shortage of extremities is the result of a genetic defect, rather than an accident, and he is believed to be the first of his six-legged kind known to humanity.

Anonymous said…
Maybe I'm mistaken, but is not the prefix 'HEX' as in "hexagon"for a 5 side or the prefix 'PENT' as in "pentagram", mean 5?. When you hear about these multiple births due to in vitro fertilization and there are 6 babies delivered for instance, are they not called "sextuplets". So there fore would not "Henry" the 'pus' actually be a "SEXAPUS"?? Just a thought.... AGRO
05 March, 2008 19:31