Bringing light to Viganella during winter 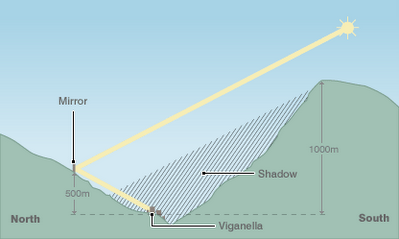 Every year, for 84 days in a row, the sun would disappear behind a 1,600-meter high mountain in the town of Viganella. As a result, the town with 197 inhabitants would be plunged into near-total darkness. Thanks to the work of Midali, a large mirror is just installed in November to bring light to this town during winter. How sweet!

The people of Viganella dreaded the arrival of winter. They would take a look at the sundial drawn on the facade of their church and sigh. They would become sleepy and SAD - the medical affliction known as "Seasonal Affective Disorder", a condition whereby the lack of sunshine reduces people's production of melatonin, a natural hormone, and makes them depressed. 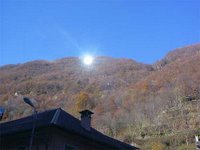 Finally, on a cold late November morning of 2006, a helicopter suddenly appeared on the horizon, carrying a huge mirror, eight metres wide by five metres tall. Workers also installed a powerful "altazimuth" computer that would move the mirror around so as to capture the sun's rays and convey them on the town's square for up to eight hours a day.

The town's inhabitants began to smile, they bought themselves a pair of shades and prepared a big inauguration party, scheduled for December 17, to celebrate the arrival of the first winter sun ever in the town's nearly 800 years of existence.